Big day today! Sean's first regular season game as a Squirt. I think I'm more excited about it than he is. Got my full length down coat, my Uggs and my stat tracker app ready to go!

This season I'm going to focus less on quantity (time on ice) and more on quality (shots, goals, assists). Will I share my findings with the boy? Probably not. Well, maybe when he's 18!
Posted by Colleen ~~ Hockey Mom at 8:27 AM 1 comment:

As always the season of limited travel (aka house league) hockey starts with evaluations. As I watched the kids on the ice, I was happy to see most of the kids looked to be close to the same level of skill. There wasn't really one "stand out" player. I like that.

Now into my own evaluation. Of the stands. There were definitely a few parents I'm not sure I would want being on MY team. Come on. We all know them. There's a few dads who think their kid skates "like a young Claude Giroux" or he "could be the next Gretzky". There's the dads who stand at the top of the stands and THINK they're coaching an NHL team in the Stanley Cup Finals shouting unintelligible commands to their son or daughter. There's the very over dressed mom who wants everyone to know that they can afford to be hockey parents. There's the parents who put their kid in the house league so he can "get more ice time" than the rest of his travel team. And then there's people like me. Parents who want their kid to live their sport and enjoy playing it win or lose.

Don't forget that parents are being evaluated too! 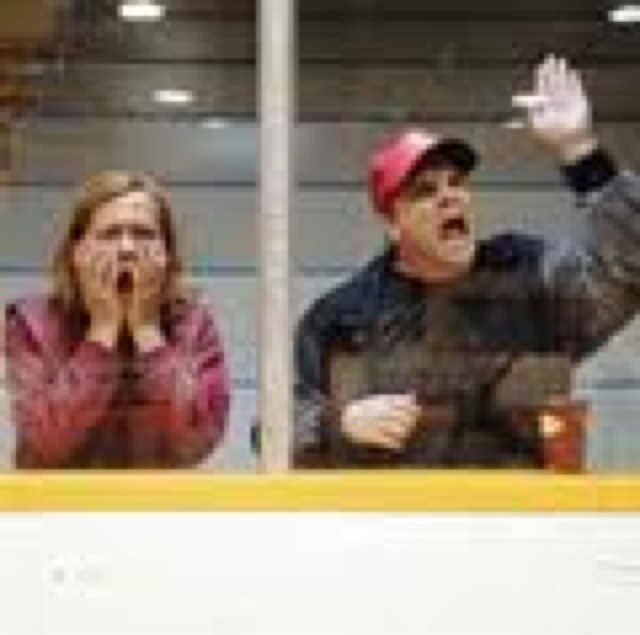 "Do You Believe in Miracles?"

Words can't even express how I felt watching my boy take the ice on Olympic/USA/hockey hallowed ground. I was proud to be an American and a mother at that moment.

The Parent/Child hockey camp weekend had its ups and downs. We had a five hour drive to our friend's cabin in the Adirondacks. It is a beautiful log home on 27 acres of wild. It was taken over by three rowdy hockey boys, two squealing younger sisters, three grown up hockey boys and their wives not to mention the owners and their mother! Whew! We muddled through and had a wonderful time!

The town of Lake Placid was one of the most adorable small towns I've ever seen. If you ever get the opportunity to visit you'll LOVE it!!!!!

On the way into town the most impressive feature is the ski jump! It's huge! They have bobsledding there too. We were able to locate the Olympic cauldron but it was on private property and not open to the public but we got pictures with the telephoto lens! The Olympic museum was really interesting. It housed artifacts from not only the 1980 Games, but the 1932 Games as well. I get a tear in my eye during the last thirty seconds of that historic hockey matchup!

I teared up watching my boy score a goal during the final skate scrimmage of the hockey camp. It was his "most favorite part" but he explained that his other favorite part was playing European hand ball on the Olympic oval (where Eric Heiden won all his medals for speed skating). (He also liked the rope swing at the lake!!!!)

It really puts things in perspective to see my little son out there on the big ice where legends were made. The wonder in his eyes when he watched that game (yet again) really makes all the time and money worth it.

We're looking at doing it again next year! 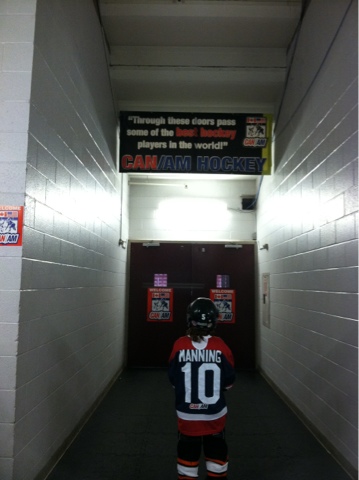 Haven't posted here in quite a while. A lot has happened in my hockey world. My little guy finished his last season as a mite. His team win first place in their first REAL tournament. (So exciting!) He started off the spring as a squirt! And yes, he still keeps trying to be a goalie once in a while. Even though he was minding the net only once he had the best GAA of the four kids who played in goal. He also had three assists in his last game. His team won only two games (the first and the last) but he feels good about being on full ice.

This past week he's been "training for Lake Placid". He and a couple of his hockey buddies, and the dads (with varying degrees of hockey playing experience) will be attending a parent-child hockey camp next month. Sean took his most recent public skate outing as an opportunity to train. He did "Herbies" up and down the rink for nearly 30 minutes. He's been doing all manner of calisthenics, pumping iron (my five pound dumbbells) in the living room. He's taking this very seriously.

Other than the camp, he's taking the summer off. He'll go to stick time a few times a month but we're generally going to be hockey-lazy this season!
Posted by Colleen ~~ Hockey Mom at 9:46 AM No comments:

My son refuses to allow a full on haircut. He calls this his hockey hair. Ugh! I tell him I'm going to put a cute pink barette in his hair to keep it out of his eyes.

While at practice one day, a professional NHL hockey player saw my son leaving the ice and said to him, "how are you going to see the puck with all that hair in your face?" Sean's reply, "I can see it better this way."

Maybe I should cut it while he's sleeping... 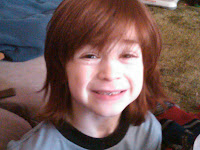 Need to get the hang of this...

The blogging thing. It's hard for me to make the time to sit down and write out what I'm thinking/learning/feeling about certain topics.

Well, another several weeks have gone by and another several hockey games and practices as well. The holidays are upon us and I am taking this time to reflect on the joys of hockey-mom-dom.

It's so nice to see my child playing well with others on his team. It's not so nice to see him playing not so nice with opposing teams! Example: This week at practice they ran some drills with the other house league team at our rink. When my son couldn't catch the kid (who happens to be the son of a current NHLer), he threw his stick at him. The other kid's dad, who happened to be at practice laughed and said, "gee, I wonder where he gets that?" I replied, "watching Scott Hartnell."

It's also nice to see my son still enjoy playing the game despite his team's record. They haven't won a game in weeks and weeks. But the kids don't seem to mind too much. They are a young and small sized team; mostly 6 or young 7 year olds. They are improving every week. In fact, teams that have beaten them by double digits are now only beating us by a goal or three. I know the kids would like to see a win now and then though, but they don't let us parents see it. Good boys.

I'm so thankful that my husband has been able to assist with coaching the team. He loves being involved with his son's sports activities and is thrilled to have those boys call him "Coach". I can see it in his eyes that he is loving every minute of it and is disappointed when he can't make it to a game or practice. I send him text updates though so it's almost like being there...sort of.

I'm so glad to be a hockey mom. It takes a special kind of parent to be a hockey mom. We don't mind the cold. We always have a blanket and gloves in the car even in the heat of the summer. We sip gallons of coffee trying to warm up and wake up at 7 am hockey games. We heave large bags of equipment into the back of our all of a sudden too small minivans. We know the best ways to get odors out of hockey pads and we aren't afraid to assist our young sons in the adjustment of the cup.

These are just some of the things I've learned and enjoyed this season...so far...
Posted by Colleen ~~ Hockey Mom at 6:58 PM No comments: